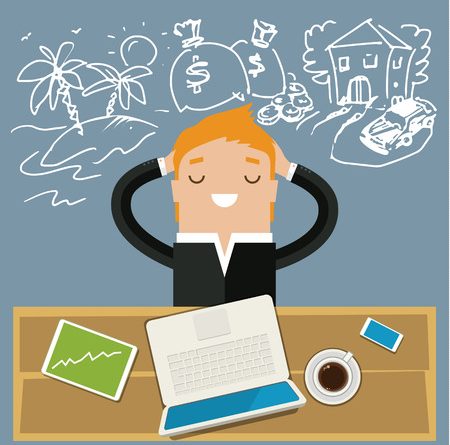 I am a bit of a daydreamer. I often sit and wonder “what if…?” and “what about…?” I guess this is part of my dyslexic creativity. Or my inability to concentrate and sustain focus. Perhaps it is my refusal to grow up.

What ever the reason for my continual day dreaming I think it is actually a useful thing. I have blogged before on how to use visualisation to help with high stakes situations – this is essentially tapping into the daydreaming thought processes.  I think daydreaming is also a useful distraction and a chance for the mind to wonder.

It may also have an unexpected benefit. Daydreaming might help me tap into subconscious thoughts and desires. A common day dream is what would I do if I won £1m, or the lottery (which would be amazingly lucky as I don’t play).

If I won the lottery…

I’d love to buy a house in Devon. I would go scuba diving more. I would work less and have the time to cycle more, possibly even do a ½ Iron Man (or even a full one if I had the time to train).  I would spend less time on amazon trying to save 20p on what ever it is I need to buy today. There is probably a lot I would do differently if money was no object.

I recently started to look at some of the things I wished I could do if money was not a barrier. I would really like a weekend getaway in Devon. So I started to do some sums. Surprisingly the numbers suggested it was a possibility. It would be a big stretch but it would be possible. Suddenly this was not a fantasy but a proposition worth discussing with my significant other. I calculated that I would probably have to compromise too many other things I want to do to make it happen so this is something that remains on the someday maybe list.

If I worked less I’d have more time to do other stuff. I would like to go diving more, to cycle more, to have more time with my family. So again I challenged myself to see what is stopping me from doing this now.  A few sums later I realised I could do a 4 day week and actually make this happen (at the expense of the possibility of a coastal retreat). So I discussed this with my long suffering significant other and my boss. I even found out work will let me pilot a reduction in hours for 6 months.  With nothing to loose I took the plunge.

Finding more time didn’t stop there. There are lots of things I wish I had more time to do and an extra 8 hours a week does not cover them all.  Non of my lottery day dreams involve being right up to date with <insert TV show here>. I probably watch 2 episodes of something every night on TV/Amazon Prime/Netflix. Some times it is nice to put my brain in neutral and unwind in front of the box. But 2 hours a day? That’s twice the weekly time I’d just saved by cutting my hours at work.

It’s not just TV. Candy crush (and sometime candy crush while I am watching TV) is also another big time sink that is not in my lottery lifestyle day dream. So I created a not to do list (well it’s actually turning out to be more of a do less list). My anti to do list has things like less TV, less candy crush, less spending hours trying to find the best deal on a £20 purchase. I can do all of these without £1m in the bank.

Benefits without the windfall

The time I have saved from doing less of stuff I don’t dream about has been invested in more cycling, more running and more swimming. I have signed up for an Olympic distance triathlon (swimming 1500m in a lake, cycling 44km around Reading and then finishing off with a 10.8km run. If that goes well a 1/2 Iron Man is a real possibility next year (though I expect my enthusiasm for training will wain as the temperature drops and the nights draw in – I’m writing this in the middle of summer).

As a result of considering what bits of my lottery lifestyle I can actually do now I have made some profound changes and some minor tweaks. Without the inspiration from the free flow of day dreams I would not have realised I could have reduced my working hours to increase my free time. It is a bit like the mini mid-life retirements Tim Ferriss talks about – and I get to enjoy it every week.

Could your daydreams be a source of inspiration for life changes you want to make?