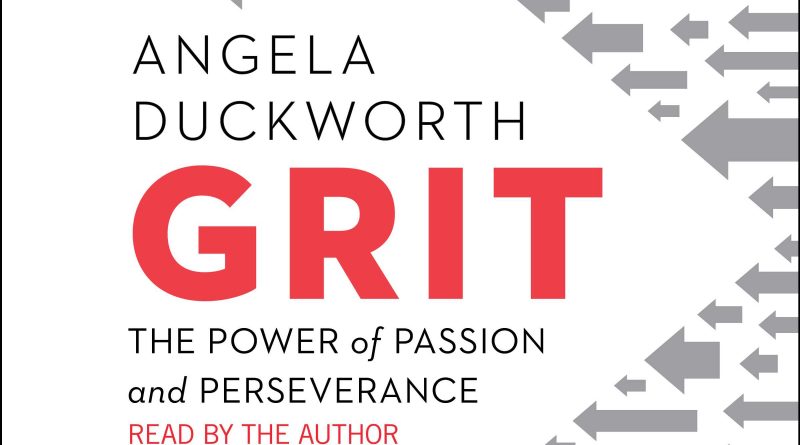 “One characteristic emerged as a significant predictor of success. And it wasn’t social intelligence. It wasn’t good looks, physical health, and it wasn’t IQ. It was grit” Angela Duckworth

In an age of standardised testing in schools and standard competency frameworks in large organisations for staff assessment grit highlights that exclusive focus on ability can distract us from the importance of other variables for success.

Grit is not just working hard.  Grit has two elements: passion and perseverance. Passion is not about intensity, it is consistency over time. It is not a volcano but the river cutting through rock. Perseverance is sustained engaged devotion: detailed focus on something for a period of time.

I think grit / tenacity / passion / perseverance / conscientiousness is a common dyslexic trait. We develop grittiness though continually having to adapt to the world which is not always well suited to us. I think we are well-practised strugglers and this might be to our advantage. I have blogged before on is dyslexia a disability or a gift. That was in part inspired by Malcolm Gladwell writing on dyslexia as a desirable difficulty.  Overcoming potent adversity as an adolescent through neuroplasticity gives hope/grit.

Who is Angela Duckworth?

Angela is a TED talk presenter and a Distinguished Professor of Psychology at the University of Pennsylvania. Angela has advised the White House, the World Bank, NBA and NFL teams, and Fortune 500 CEOs. Grit also made her a New York Times best seller.

Angela puts forward that talent is often overemphasised. Natural born skill is often preferred to hard won results.  However, talent with no effort is just unrealised potential.  Talent needs effort to become skill.  Skill needs to be put to productive use to result in achievement.

Angela hosts a grit assessment on her website. The Grit Scale which measures a person’s grittiness can correctly predict a range of outcomes from which cadets would have success at West Point, to who would progress to the next round in national spelling bee’s. I do wonder if there were any dyslexic outliers in this prediction. Probably not as we are unlikely to be at a spelling bee in the first place).

With the answers to 10 questions the website will tell you how gritty you perceive yourself to be (providing you answer honestly and a reasonably self-aware).

The important thing to remember is that grit is a mutable attribute. Like most things in life if you approach it with a growth mind-set you can get better over time.

How to improve grit

To improve grit there are 4 areas to focus on:
1) Interest – passion begins with enjoying what you do
2) Practice – a daily discipline of continual improvement
3) Purpose – ripening the passion with the conviction what you are doing matters
4) Hope – the belief you have the power to make things better

The first step to improving grit is developing interest. This is where you fall in love with something. You find that you’re thinking about it more and more. The development of interest can take time and new interest can be fragile. It can be worth committing to an interest up front to continually explore it.  Interest often precedes talent. It is interest that sparks the drive to practice.

Proper practice makes perfect.  Anders Ericsson, who did the original “10,000 hours” research, emphasized that deliberate practice isn’t easy. It is not simply doing something for a long period of time. 25 years of experience is different to 1 year of experience repeated 25 times.

“As soon as possible, experts hungrily seek feedback on how they did. Necessarily, much of that feedback is negative. This means that experts are more interested in what they did wrong-so they can fix it than what they did right. The active processing of this feedback is as essential as its immediacy.”

Gritty people are more motivated than others to seek meaning and an other-centered life. Gritty people have aims beyond themselves. A purpose of greater external goodness – “the greater good”. This purpose is not always well intentioned (e.g. Hitler).

” What ripens passion is the conviction that your work matters. For most people, interest without purpose is nearly impossible to sustain for a lifetime. It is therefore imperative that you identify your work as both personally interesting and, at the same time, integrally connected to the well-being of others.”

Job crafting / job design can come in here. This is trading in more of what you like to a job and trading out what you don’t. I think this is one of the ways managers get the most out of a diverse team – by tweaking roles to get the best from everyone rather than expecting everyone to be the same.

Angela is not calling for some woo-woo idle dream that things are going to get better. Like deliberate practice differs from just doing something over and over active hope differs from finger crossing.Grit depends on a different kind of hope. It rests on the expectation that our own efforts can improve our future. “I have a feeling tomorrow will be better” is different from

Grit depends on a different kind of hope. It rests on the expectation that our own efforts can improve our future. “I have a feeling tomorrow will be better” is different from
“I resolve to make tomorrow better.” The hope that gritty people have has nothing to do with luck and everything to do with getting up again.

The opposite of this is Learned Helplessness -a suffering you think you can’t control.

A Culture of Grit

The people we hang around with influence us greatly. It is often said you are the average of your 5 closest friends . Culture is the shared norms of a group of people. If you want to be grittier, find a gritty culture and join in.

Quote of the book

Threat your brain like an epic journey and pack accordingly.