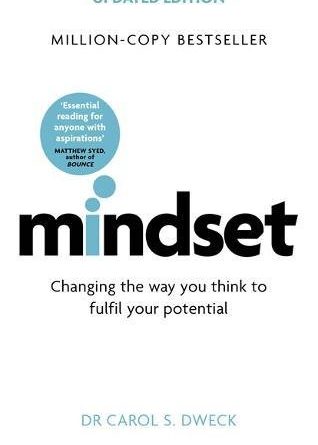 I’ve read many blogs and listened to loads of podcasts about the Growth Mindset. The “Growth Mindset” was a term coined by professor Carol Dweck to describe people who believe their talents can be developed through hard work, good strategies and input from others. I’ve even blogged myself on the Growth Mindset.

As a parent and the lead of a Dyslexia & Dyspraxic support group, I was keen to learn more about how to harness the power of mindsets. Partly spurred on by imposter syndrome I ploughed through the book

(and in a departure from my normal from it was an actual paper book).

Possibly influenced by the medium I was disappointed by the book. Weighing in at over 300 pages I was expecting so much more than what I had uncovered from other blogs and podcasts. I wanted actionable advice. What I got was a collection of examples from different contexts. Useful, but not what I was hoping for.

I think the mindset concept is a very powerful one. However, the book feels like it has been oversimplified. Rather than give hard science or detailed insights there are just collections of examples. I would have either preferred an 80-page book or some more substantive detail.

The core of the book is the principle that there are two mindsets. The fixed mindset is one of a belief that talents are natural born capabilities. The growth mindset is one that recognises there may be limits to capability but with effort, they can improve themselves.

The two mindsets give rise to different behaviours. Fixed mindset people have a need to prove themselves over and over. If capabilities are fixed it is important that they are seen to be good. Growth mindset people don’t time proving how good they are they welcome feedback and critique as a route to improvement.

The book covers a subtlety not often covered: people may have growth mindsets in some contexts and fixed mindsets in others. For example, someone might embark in a couch to 10k running programme knowing it will help them get better at running. That same person may shy away from learning a language thinking that they are no good with languages.

Alfred Binet, the inventor of the IQ test, had not intended this tool to be a fixed measure of unchangeable intelligence. It was intended as a tool to measure progress. This caused me to ponder the dyslexia assessment. My weakest attribute on the assessment was my memory. The test for this was digit sequencing. From Moonwalking with Einstein I have learned techniques that will help me perform better in this test. Would this mean I am now less dyslexic?

The book provides a collection of famous people who did not perform well in their early life. Michael Jordan was cut from his high school basketball team. Jackson Pollocks early are is not that great, likewise Mozart’s early music. Wilma Rudolph is considered the fastest woman on earth but was a very sick child.

My favourite example is Bruce Jenner the 1973 Olympic gold decathlon winner. He attributes his success to the tenacity which results from his dyslexia. I do have a soft sport for those dyslexics that harness their gifts.

Jack Welch of GE fame evaluates staff on “run way” rather than just performance. How you perform is not as important to Welch as your capacity to grow.
Fixed mindset people opt for short term success over growth. Failure can be painful in a fixed mindset. Failure can be interpreted not just as an outcome (what I did failed) but also an identity (I am a failure). This can lead to undesirable behaviours

One thought on “Mindset by Dr Carol Dweck a book summary”