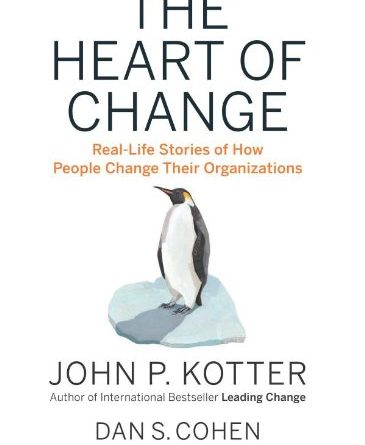 I was grabbed by the subtitle of this book: “Real-life stories of how people change their organisations”. Admittedly it was the day job as a programme/project manager that brought my attention to books on organisational change. However, I often think my role as a Dyslexia and Dyspraxia network lead presents me with greater organisational change challenges (and fewer resources with which to do it).

The heart of the book in a paragraph

People chance what they do because they are shown a truth that influences their feeling. The words motion and emotion are linked at their root for good reason. The 8 step process for change is:
1. Create a sense of urgency
2. Pull together a guiding team powerful enough to guide the change
3. Create clear, simple, uplifting visions
4. Communicate the vision through simple heartfelt messages
5. Empower people by removing obstacles
6. Create short terms wins to provide momentum
7. Maintain momentum to enable wave after wave of change
8. Make the change stick by nurturing a new culture

Without urgency organisational change will not happen. There are 4 behaviours that stop change:
– Complacency / pride / arrogance
– Immobilisation and self-preservation driven by fear
– “You can’t make me” deviance
– Pessimism leading to hesitation

The create urgency: show people the burning platform. Don’t try to start with a vision. Show people the need to change with concrete examples. Provide dramatic evidence that demonstrates the change is required.

There are two great examples given in the book – a video of an angry customer complaining, and 424 different types of gloves a company ordered stacked on the board room table. This map well on the approach from Made to Stick as they are concrete and emotional.

The guiding team needs to be composed of the right people working as a team. They need relevant knowledge of what is happening inside and outside the organisation. They need to have credibility and connections as these are essential to removing blockers. They need valid information about the internal working of the organisation. They need formal authority and the management and leadership skills to plan, monitor, motivate and build community. I feel the lack of such a team is the reason why so many changes fail.

In addition to the guiding team, Kotter proposes additional groups will be needed at lower levels in the organisation to drive action in their local areas.

3. Get the vision right

A well functioning guiding team answers the questions to provide a clear sense of direction. Why is this change necessary? What’s the vision? What must not change?

Kotter gives 4 aspects for driving the change in the right direction:
– Budget: the finance part of the change plan
– Plan: specifying how to implement the strategy
– Strategy: detailing how to achieve the vision
– Vision: a description of the end state
The vision is probably less than a page. The strategy is less than 10 pages. The plan and budget are likely to be much more expansive.

Create a bold strategy and move quickly. Don’t rely on analytical and financial based visions. Visions to slash costs rarely motivate. If those saves costs enable something more engaging then the vision should be about realising that ambition.

Communicate to get as many people as possible acting to make the vision a reality. Match words with deeds as actions speak far louder. The guiding team should regularly ask if their actions over the past week have been consistent with the vision.

In the book, there is an example of nuking the executive floor. A low-cost vision was at odds with a lavish exec floor. The new CEO gutted the floor. The fancy artwork was sold to release cash to make smaller offices. Gone was the exclusive club atmosphere and the costs were recouped within 2 years.

Remove obstacles. Often these obstacles will be reluctant bosses. Change can be difficult for those invested in the status quo. Remove “system” barriers such as evaluations and rewards that are counter to the new vision. Consider information barriers – lack of information can disempower. Feedback on actions can empower

Early victories nourish faith in the change effort. Without early, visible, meaningful wins a change will run out of steam. Quick wins prove feedback about the validity of the strategic vision. There is an interesting link here to the Lean Startup approach to validated learning.

Give those working hard on the change a pat on the back. Celebrate successes. Building faith in the changes will attract more help. Take power away from the cynics by focusing on a small set of the change and driving to tangible results.

After quick wins the change will have direction and momentum. Build on this, keeping the urgency high, and don’t declare victory too early. Don’t let the change suffer from exhaustion. Stop doing old work to make more time for the new ways of working.

If change is only held in place by the guiding team it will not survive. Tradition is a powerful force. Tradition slowly reverts things to the way they were.

Culture is the behavioural norms and shared values of a group. A set of feelings about what is valued and how the members of the team should act. Culture can make change stick. But culture change is hard.

The right promotions and reward systems can strengthen new cultural norms. The employee orientation programme can be used to build a new culture with the new recruits.