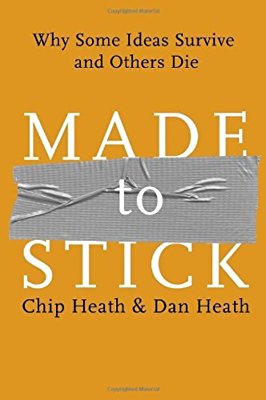 What makes an idea stick? Why can we remember intricate stories but not complicated facts? What is the curiosity gap? Made to Stick sets out answer these questions and to help people create more compelling messages. This is not just about marketing sales pitches, it’s about more effective communication. My interests following Moonwalking With Einstein was in seeing if I could use the techniques to improve my memory.

The book sets out a simple recipe for success: SUCCES (the dyslexic in me does not need to worry about the missing S on the end. A message needs to be Simple, Unexpected, Concrete, Credible, Emotional, and Story. For a message to stick, for it to be lasting, it needs to make the audience pay attention (unexpected), understand the point (simple & concrete), believe in it (credible), care about it (emotional), and be able to take action on it (story).

What is sticky and why would we want it?

. Chip and Dan use it to refer to messages that have the power of endurance without the need for an extravagant marketing budget. Ideas that resonate and take hold. We all need to communicate, we all have messages we want to get across. Few of us have a toolkit to help hone this into an effective message.

A checklist for SUCCESs

“I believe that this nation should commit itself to achieving the goal, before this decade is out, of landing a man on the moon and returning him safely to the earth. No single space project in this period will be more impressive to mankind, or more important for the long-range exploration of space.” -President Kennedy, Address to Congress on Urgent National Needs, May 25, 1961

Kennedy’s man on the moon message was very simple. It is an example of commanders intent. Commanders intent is a military briefing technique to overcome the fact that no plan survives contact with reality. It boils a message down to the core elements for success. It is easily remembered and provides a framework for making decisions.

There is a constant struggle between conveying complexity and nuance versus clearly articulating the core message. Ruthless prioritisation, chipping away at the non-essential aspects, is challenging but necessary. A concrete example of this is the frictionless slope used in schools to educate children about acceleration and gravity. Scientifically this model is wrong, but it is effective at teaching essential building blocks. Retaining the friction of the surface, the friction within the object sliding down the slope and inefficiencies in any wheels renders the core concept, the teaching point, lost in the detail.

One technique for managing the ruthless prioritisation is the inverted pyramid approach. Newspapers developed this technique so an editor could quickly see which bits of an article to cut is space was short. The inverted pyramid puts the most important aspect in the headline. The first paragraph expands on the headline. Subsequent paragraphs add more detail in decreasing level of importance. However much of an article you read you know you have the most important bits. Getting this wrong is called burying the lead.

Profound simplicity can be achieved through the use of schemas. Schemas can be invoked through analogies in the form like… but… A pomelo is like a grapefruit but bigger. This is much more efficient than describing all the qualities of a pomelo and the reference to something familiar helps the listener to make informed decisions. Would you eat a pomelo for breakfast?

Information dense schemas can compress a huge amount of information into a short space and also provide a decision-making framework. This is taken to the extreme with high concept movie pitches. The movie Speed

on a bus. Just 5 words and you know it will be a high budget action movie. It is probably not a good first date movie. It will have a well-known actor in the lead, probably thrust into the limelight unexpectedly.

Some schemas are generative analogies. That is you can take the idea and extrapolate from it. Disney metaphor of employees as cast members allows new recruits to infer a whole collection of behaviours. This does not always work – Subways “sandwich artists” are not granted the freedom one would expect an artist to have so the analogy breaks down.

The curse of knowledge somewhat complicates the process of making a message simple. Once we know something it is hard to imagine not knowing it. This is demonstrated by an experiment called tappers and listeners. The tapper taps out a tune and the listener has to guess the tune. Most tappers are confident their rendition is good enough for most people to name the tune. The experiment showed that only 2.5% of songs were correctly identified.

Surprise gets attention but the surprise needs to be relevant. If the surprise is not relevant the surprise is remembered but the message is not. A surprise must not be predictable but it should be post-dictable. Break persons guessing machine and then fix it.

An example is a commercial that looks like a mini-van advert. As the Enclave mini-van advert starts the car advert schema loads subconsciously in our mind. We know what to expect. We know what’s coming. Then… WHAM it smashes into another vehicle. This grabs out attention as it was not was we expected. This was not a car advert it was a road safety campaign.

Another route to invoke the guessing machine is by creating open loops. Humans like closure. Closing loops is why we stay to the end of a bad movie so that we can find out what happens and address out curiosity. Creating stories can open loops that create knowledge gaps. Curiosity kicks in and creates a drive for answers.

Tangible things are easier to grasp than abstract things. Aesop could have written about how it is easy to despise what you can’t have. And no one would have taken notice. His tale of the fox and the sour grapes invokes rich concrete imagery. This fable as transcends nearly every language. It has stuck for 100’s of years. All without a marketing budget.

Our memory is not like a filing cabinet where things are indexed for retrieval. Our memory is more like velcro. The more hooks an idea has the easier it is to remember. This is the reason for the baker / Baker paradox.

Movie popcorn has a lot of fat in it. We could try to persuade people to avoid popcorn because it has 38g of fat. This is not an easy fact to relate to – 38g sounds a lot but how much fat a day is ok? Making a concrete comparison to a full cooked breakfast and highlighting that popcorn has more fat hammers the message home.

For messages to stick they need to be credible. Credibility can be invoked through a number of approaches. The most effective approach will depend on the audience.

Credibility can be inferred from authority and anti-authority figures. An anti-smoking figure can be heralded by a scientist (authority figure) but it might resonate more with smokers coming from a dying smoker (anti-authority). Conversely, a doctor considering offering smoking cessation services is more likely to listen to the scientist.

Details can create an internal credibility. Vivid details create a knowledge credibility. Jurors in court ar more likely to believe a testimony with lots of details, even if those details are not relevant to the case.

The Sinatra test is another route to credibility. If I can make it there, I’ll make it anywhere. If you were the courier entrusted with delivering the Harry Potter books that create more credibility than statistics for on-time deliveries.

Testable credentials allow others to decide on your credibility for themselves. This was seen in the election campaign: “Are you better off than you were 4 years ago”. Another great example was Wendy’s who ran a “where’s the beef campaign”. Rather than talk about how they had more beef in their burgers than others they challenge potential customers to make the comparison.

For a message to stick people need to care about it. One approach is appealing to self-interest – what’s in it for me. We need to be careful of assuming everyone else is living in Maslow’s Basement, while we’re occupying the higher levels of the pyramid.

Group interest can often be more powerful than self-interest. The “Don’t mess with Texas” anti-litter campaign appealed to the group identity of Texans rather than play to self-interest.

Stories are to dry facts what flight simulators are to a plane instruction manuals – they bring them to life. Mental simulation activities the brain like actual activity. The challenge with stories is creating them. It need not be if you keep your eyes peeled to discover and collect stories rather than create them.

There are a number of common formats to stories:

I’m still working on a visual summary to condense the above like I did for The Dyslexic Advantage. I’ve got a few pages of doodles but I need to put them together into something shareable. In the meantime, I found a great mind map summary of this book on the web.

5 thoughts on “Made To Stick”