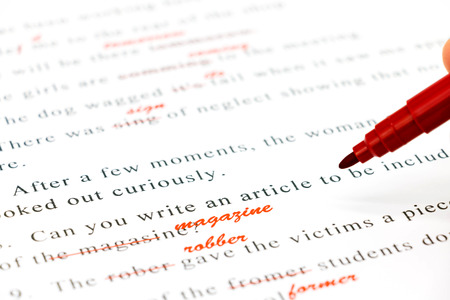 Assistive tech can be great for overcoming challenges associated with disabilities.  However, they must be used with caution as some cause more problems than they solve.

I had a fancy electronic typewriter in my teens.  I was struggling to write legibly for my English homework and I managed to negotiate with my teacher to type my longer writing pieces.  This is before I discovered I was dyslexic.  The typewriter had a 2 line display and a built-in dictionary.  I could write a line of text and hit enter and dependent on how I set it up either print that line on the paper or store it to memory.  If I got a word wrong it would beep.  I would not know where I had gone wrong but I could keep trying until it stopped beeping (occasionally resorting to the dictionary).  This helped improve my typing accuracy as many errors were typing troubles (there’s the dyspraxia shining through).  It helped improve my spelling as I’d get a constant reminder of my errors.

Flash forward to university and I had a computer and access to Microsoft Word.  The little red underline would let me know I’d gone astray but now I had the help of possible words I was trying to spell.  This may have occasionally resulted in the odd mischosen word but it was much faster than my old type-writer.  While at university I discovered my dyslexia and dyspraxia and the local education authority got me some assistive tech including Inspiration mind mapping software, a cassette recorder for recording lectures, voice to text software and  Text Help Read and Write.  I’ll write about my other misadventures with assistive tech another time so I can keep on topic here.

Back then Text Help was little more than a much better-tuned spell checker but it did have some killer features: read back and high-risk word highlighting.  Read back, as it sounds, reads back what you have written and in doing so highlights missing words and mischosen words.  The high-risk word detection ( I can’t remember what the feature was called) highlighted homophones (words that sound the same but have different meanings such as there and their) and also if I remember correctly other frequently interchanged words (lose and loose).  This was a massive help as back then the word spell checker needed several attempts to get to some words and text help just worked.

On starting work I did not know about the help I could get so I initially had no assistive tech.  By 2001 the spell checker in word had got good enough that I could get by with it with the added bonus that anything really important could always be checked by a colleague.  I managed fine without Tech Help and got on with my job.

The Steady March of Technology Progress

Word continued to improve it spelling checker and with it autocorrect.  At some point over the years rather than tell me I’d got a simple word wrong it would just magically correct it for me.  Great – I love progress.  However, there is a downside: my typing has got a lot worse.  I’ve not measured it but I am convinced my typing has got slower and I am also using fewer fingers to type.  I’ve switched from input and editing being two separate passes to just one pass which is actually more taxing on my working memory.  And if I turn autocorrect off then I see that I’m getting loads of simple typos in addition to those words I can’t spell reliably.  In turn, this means I am miss typing longer words too, which make it harder for the spell checker to cope.

And that’s not the worst of it

On my mac at home (where I am writing this) autocorrect is  a powerful beast.  It corrects many words – well beyond simple typing.  However due to my recently atrophied typing skills and my dyslexic challenges I can get quite a lot of random words.  So assistive tech has come full circle and in overcoming some challenges has introduced new ones.

I’ve recently started playing with Grammarly which is great at identifying possibly miss placed words in addition to highlighting spelling.  I’m still on the trial version but might splash out on the full one if my blog gets popular.  I’m also considering exploring text to speech options so I can hear my longer written work read back to me to sense check it.  This might bring me back to Text Help which in the last 20 years looks to have come a long way.  Which makes  me ponder how far has voice dictation has come in that time.

How do you solve a technology problem?  With more technology of course.

One thought on “The Curse of Autocorrect”