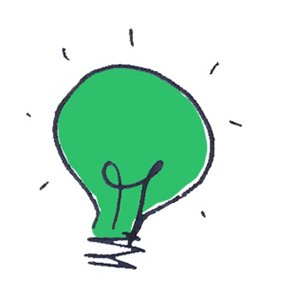 I recently benefited from a training course in Graphical Facilitation and Graphic Recording with Graphic Change. In my head, I think in concepts. These are not always pictures but I rarely think in words. Even when I am writing and I am in a verbal mode I’ll think of a concept or a notion I want to express but not be able to write that in words. For some reason, this is more challenging when I am trying to get things on paper. When it comes to speaking with people I appear to do much better.

My dyspraxia means when it comes to drawing even if my head is filled with images I can’t get them on paper. Everyone thinks they can’t draw but remember as dyspraxic I can find it hard to write on a line as I lack that fine motor control.

Drawing is further complicated if I have a vivid picture in my mind and I can’t recreate it beautify. At school we were taught to colour within the lines, to be neat and tidy. If there is a gulf between what is in my mind’s eye and what’s on paper I’m likely to get frustrated.

I’m a believer in the concept of the Growth Mindset. Talents can be honed with practice. Could a course teach me how to use graphic recording? Yes and I learned so much more than that.

TED talks and Sketchnotes have popularised hand drawn illustrative summaries and graphic recording. These works of art are shared on visual platforms like Pinterest. There is, however, more to it than visual appeal. Science shows that are brains are very visual. I’ve covered this in Moonwalking with Einstein. When I was studying at university my hook into my notes was nearly always the position it was on the page. Failing that it might be the place I was in or the music I was listening to. My brain certainly does not act like a filing cabinet proving access by ordered topics. Graphic recording lets me exploit this feature to boost my memory recall.

Cara was confident by the end of the course we would all be able to put the techniques into practice. So we started with the building blocks of graphical capture. Fortunately, there are fewer elemental primitives in drawing than there are letters in the alphabet.

With this key skill affirmed it was time to put it all into practice. Well, that is after we learned techniques for colouring in. Throughout the course, the complexity ramps up. As the end of the course draws near there are real time practices against TED talks and in-room conversations. The real challenge though comes in the form of a Pictionary-style game where all the words are concepts.

The teams pitted their wits to win the prize. In review though, the real prize was it stopped us all self-censoring. We draw things quickly to explain the word on the card, we pivoted to other drawings if it did not work. At the end of the exercise, we had boards filled with graphic depictions of complex concepts. This was all about building a visual dictionary that can be called on when needed. It also demonstrated the pictures did not need to be perfect to be effective. And we learned how to draw people.

Back in the office

In the office, I tend to only capture actions in meetings so I have not used the techniques as much as I would like. For the blog, I still tend to mind map. However, I have found it a massive help to learning.

It appears I can hear something and write it down without it actually passing through my brain. In fact, I’m I am taking notes I am actually less likely to think about what has been saying. This might be the processing speed aspects of my dyslexia or dyspraxia but I suspect I am not alone. When I don’t take notes I can focus and reflect but I run the risk of forgetting. When I capture graphically it forces me to focus on what aspects are important. I look for patterns, for conflicts, for implications. I don’t need to rush and scribble and panic about how to spell. I’m freed from fear of forgetting as I have a recall aid.

I’m still not confident enough to capture in real time. It will take practice. I have developed a two-step process that I am using for audio books. I’ll capture notes in my journal and then I’ll condense them into an image. Many of my visual summaries are still dense with text.

This has advantages on many levels. I am actively engaged as I am listening and taking notes. As I review my notes I am recapping which provides consolidated learning. I and summarising as I extract the key points and think about how to represent them. The Dyslexic Advantage is a 300+ page book (or for me 7 audio CDs) on which I took  5 pages of notes. All of that information is summarised in the image below. Now when I want to refresh myself it is all there in one picture. 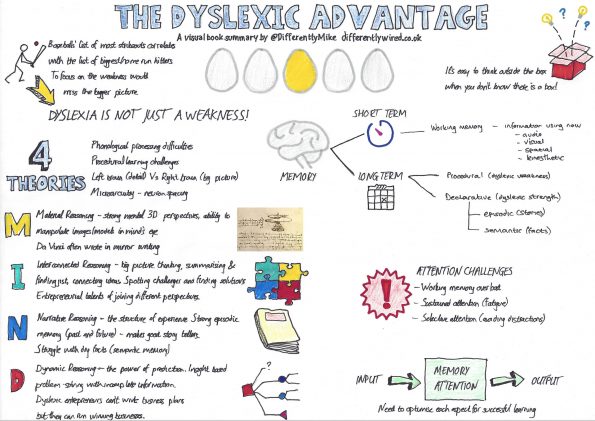 Graphic recording is a really powerful technique. It is learning a new language so it takes time. As the above shows, I still have a way to go – but that’s what continual improvement is all about. The prospect that I might be able to create a system where I can recall all the key points from all the books I’ve read facinates me. Graphic recording does not need to be art to be effective.

A picture paints a thousand words. For me, that results in a lot less stress over spelling and a lot less time spent reading.